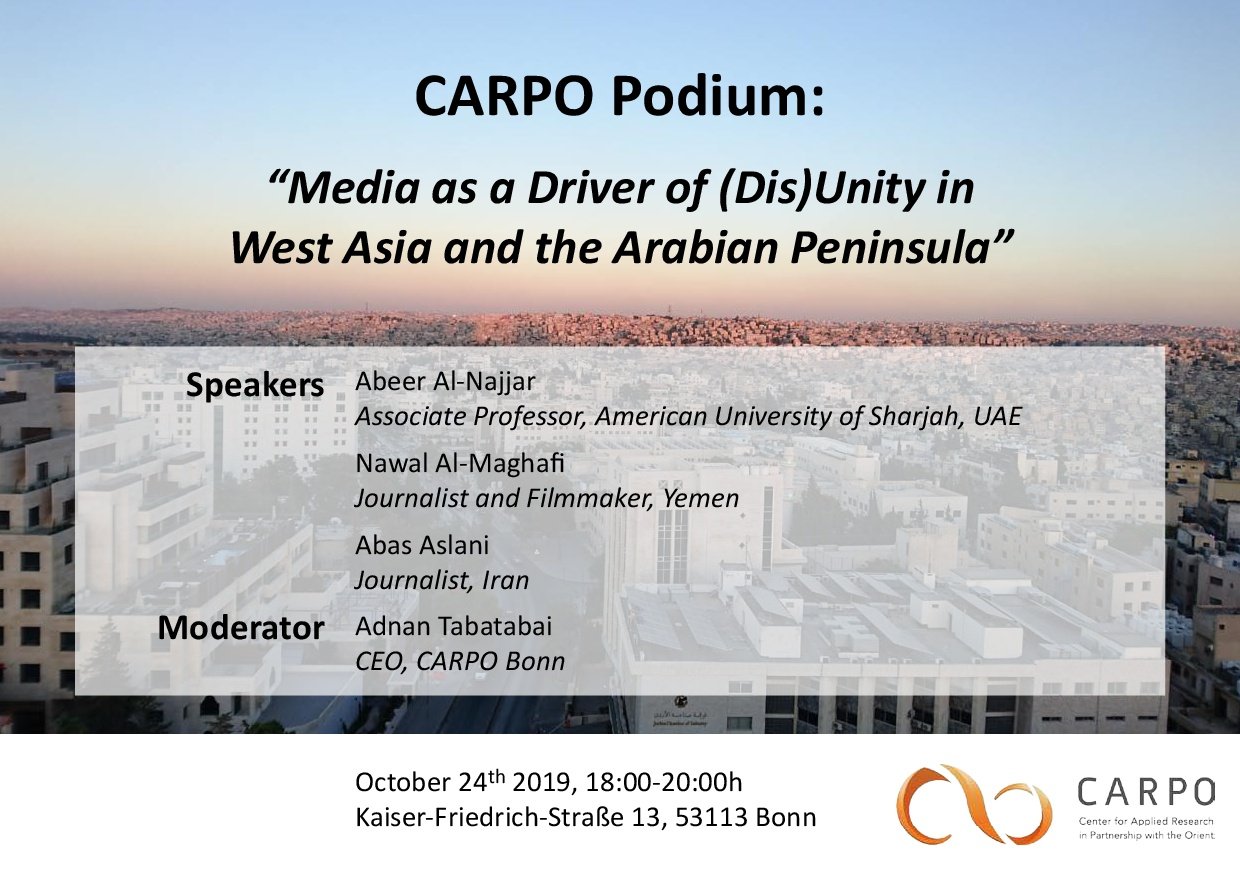 Abeer Al-Najjar from the United Arab Emirates argued that the region needs media outlets that are part of a dynamic environment, adaptable to new tools and platforms, exploring possibilities in each country and navigating through different levels of freedoms available on the ground. A driver of such a development would need to be civil society, demanding free media and being wary of other loyalties media actors might have towards the state, economic players, culture or ideological actors. Currently, she observes a rather concerning trend in the region as the media is undergoing “weaponization” and “sectarianization”. In her view, in contexts like the Yemen, media is frequently used as an “electronic army” taking a pivotal position in spreading certain ideologies and viewpoints. To overcome this misuse of media, she proposed, civil society actors must become more media literate. For this to take place education and the creation of a safe media space is needed, which enables consumers to compare different media beyond their own borders.

Nawal Al-Maghafi from Yemen emphasized the importance of efforts to empower media in WAAP. Particularly the regional media sector is often misused for political purposes and runs strong agendas. The youth of the region is constantly exposed to this, shaping their opinion in a certain direction and in the context of wars often luring them into being part of the conflicts. Media in this context fall short of providing views with the full picture of events and developments so that their consumers can put things in perspective. The task of informing the regional public, Al-Maghafi argued, should not be taken over by international outlets, since their main audience is not the public in WAAP. Due to the position as an outside observer to regional events the full picture cannot be portrayed in this foreign outlets. This problem becomes apparent, according to Al-Maghafi, when preoccupations and agendas of international media are broadcast and distributed in the a region, allowing local media to amplify that agenda further.

Much more transparency is needed, said Al-Maghafi, about who is behind a media outlet, and monetary channels behind it need to be revealed. This was seen as important because international media is still seen in the region as content with a “stamp of approval”. This mindset needs to be changed, and journalists on the ground empowered and supported in their roles.

In order to detach the media sector in WAAP from state control, with the aim to initiate regional cross boarder cooperation of media outlets, a supranational regulatory body for media could be established, Al-Maghafi suggested, so that media content can be fact-checked and conflict-sensitive language and exchange of information monitored.

Abas Aslani from Iran points out, that in the region nearly the entire media sector is organized by states and through this highly affected by red lines or state control. Furthermore, when it comes to regional topics transcending national borders, multiple national media tend to argue against each instead of trying to reach out and develop news coverage partially together. Instead, Aslani argued, we continue seeing othering, polarization and sectarianism.

The online/social media space, Aslani held, could be a positive contrast to this, since (at least in theory) it is accessible without borders. Through social media bottom-up pressure can be exerted on governments, and it is much more difficult for governments to develop regulations and limitations against this phenomenon. Aslani continued that in the last few years, governments in the region have caught up to the potential of social and online media, and have started to be present with their own accounts. Behind the backdrop of this development, media literacy for consumers as well as for the media professionals is needed, in Aslani’s view, in order to deal with media responsibly. The new complexity of regional media needs to be defined trough better knowledge and the ability to differentiate media content.

All three speakers agreed that media should be seen as a social institution with the potential role of a mediator. But for that to happen much more needs to be invested in the professionalism, independence and impartiality of outlets.