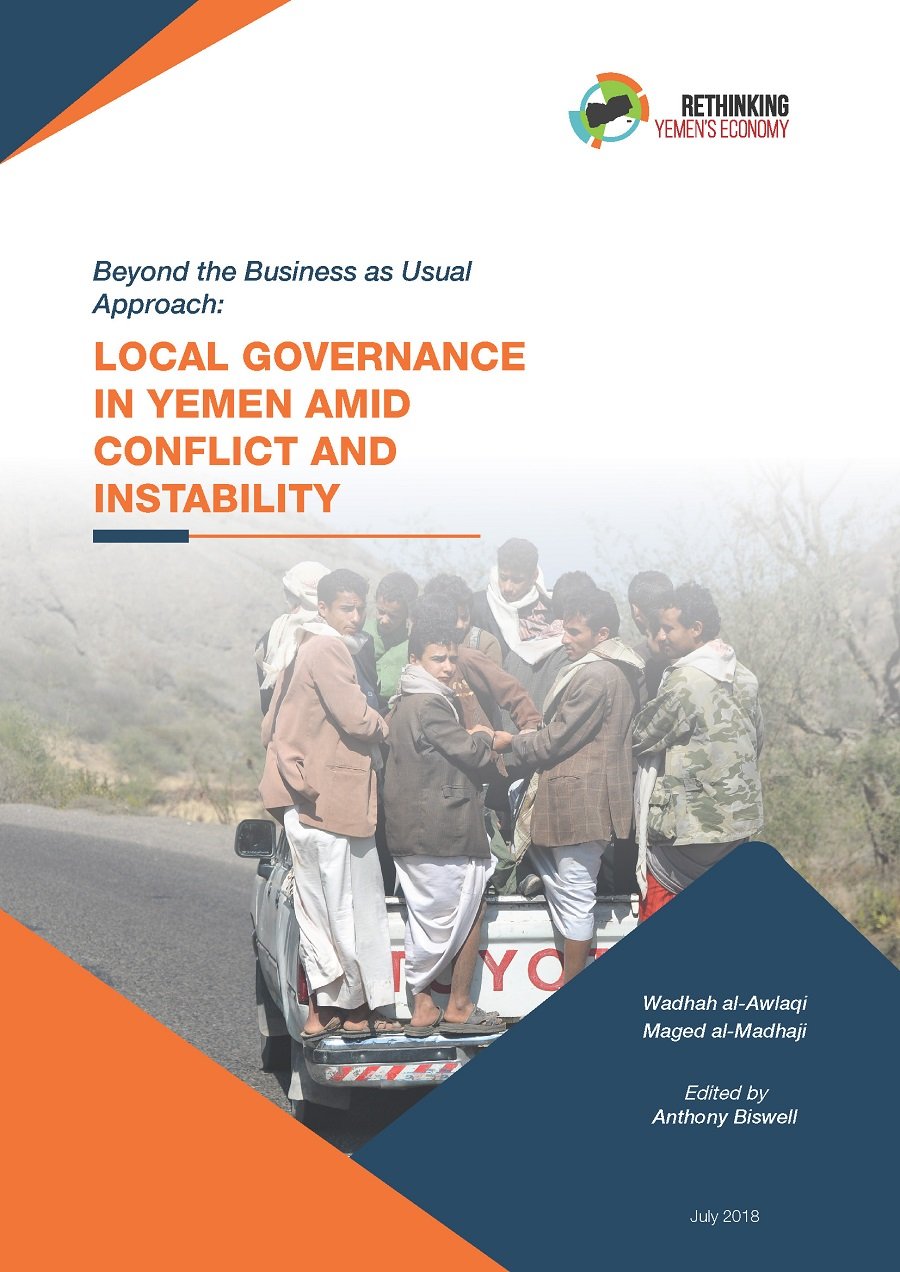 This White Paper deals with the role of local councils in Yemen and analyses their current situation. In the absence of central state authority and despite all the challenges they face, these councils remain important instruments for coordinating humanitarian relief efforts and local-level conflict mediation. Local councils are among the best-equipped and best-established institutions to support a shift away from the previous centralized model. Thus the Brief concludes that it is imperative that local, regional and international actors seek not merely to keep local governance structures from collapse but to enhance the capacities of local councils in post-conflict scenarios. 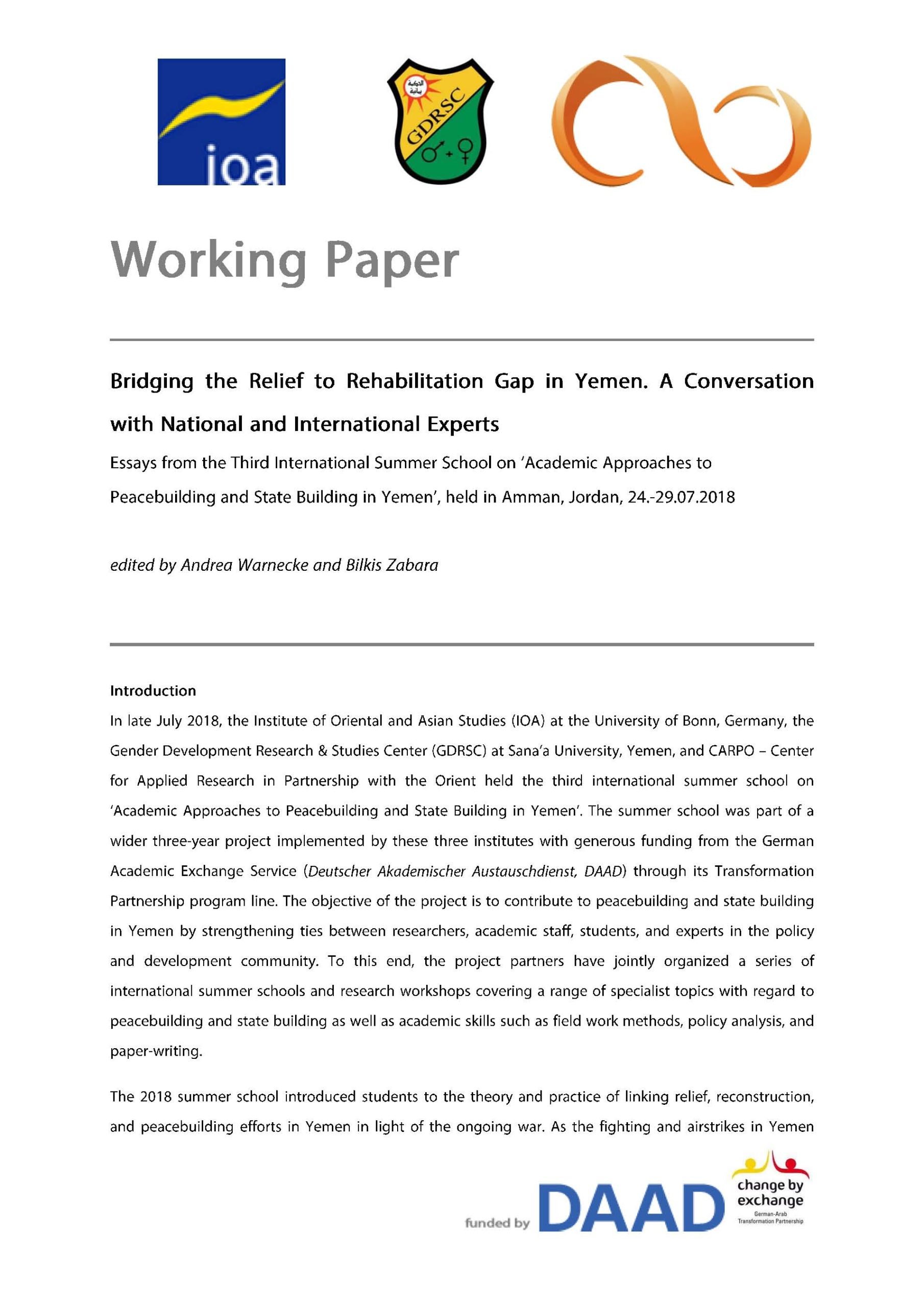 This publication is an output of our 2018 summer school, which introduced students to the theory and practice of linking relief, reconstruction, and peacebuilding efforts in Yemen in light of the ongoing war. As the fighting and airstrikes in Yemen have continued unabatedly, several international governmental and non-governmental organizations have had to reconsider their approaches to delivering aid during war. In particular, humanitarian aid and assistance have at times been politicized by the warring parties or altogether withheld by denying access to areas most at risk. At the same time, a number of parties to the internationalized war in Yemen simultaneously act as humanitarian donors, throwing into question the degree to which such aid adheres to the traditional humanitarian principles of humanity, impartiality, and neutrality. In four essays, the participating students discuss the politics of relief and reconstruction; security in Yemen; justice, reconciliation and the political framework; and the socio-economic framework. 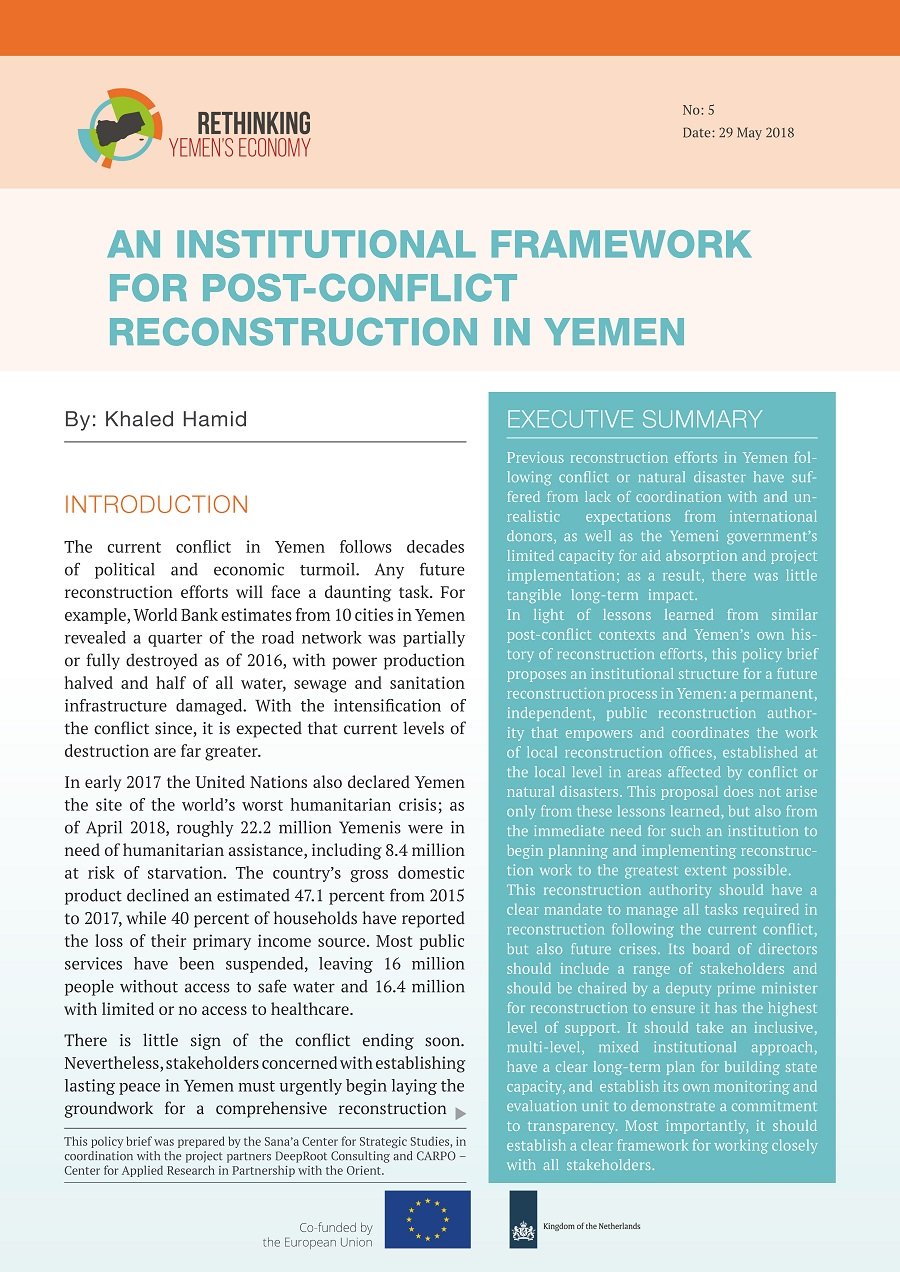 This Policy Brief proposes an institutional structure for a future reconstruction process in Yemen: a permanent, independent, public reconstruction authority that empowers and coordinates the work of local reconstruction offices, established at the local level in areas affected by conflict or natural disasters.This proposal does not arise only from lessons learned from previous reconstruction efforts in Yemen, but also from the immediate need for such an institution to begin planning and implementing reconstruction work to the greatest extent possible. 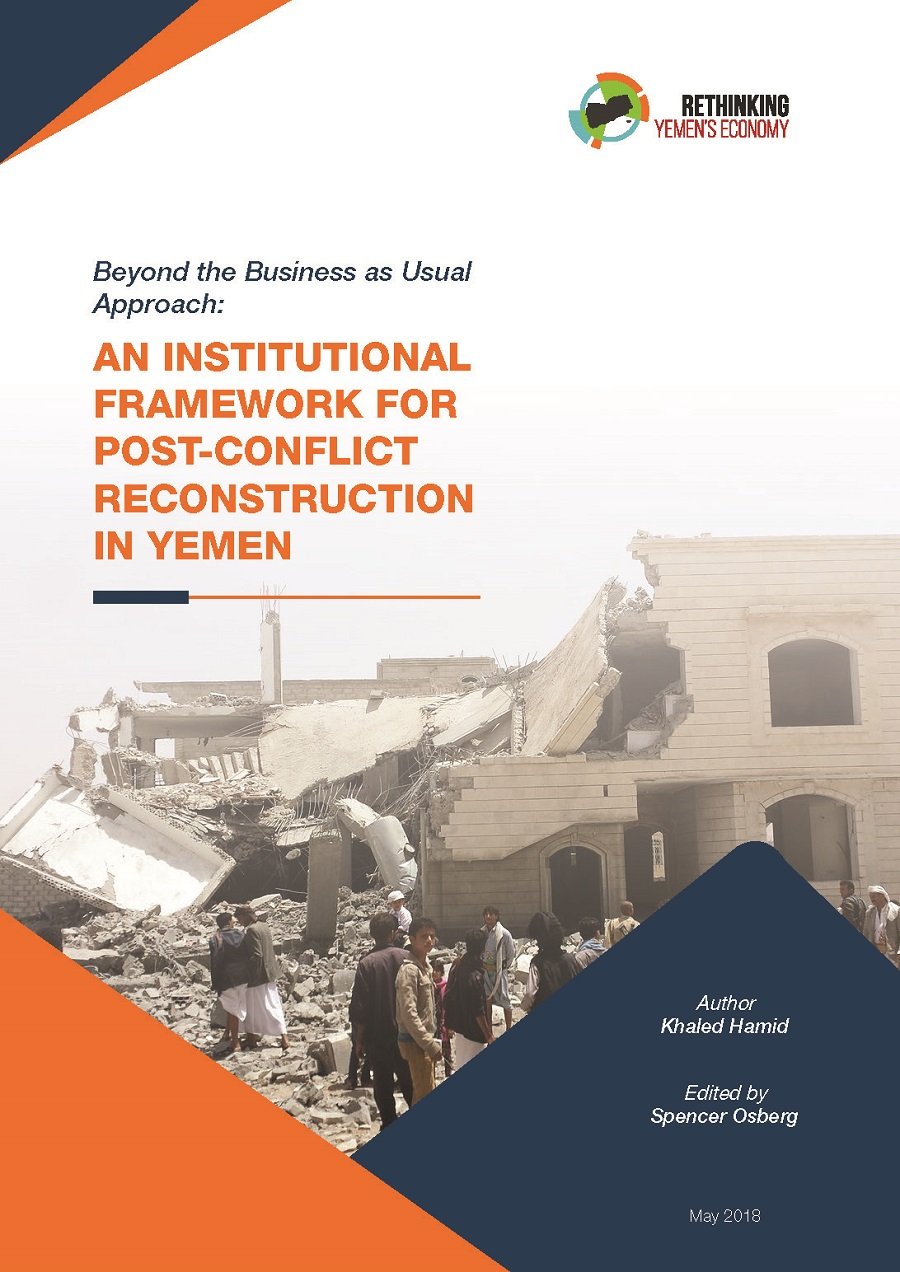 This White Paper proposes an institutional structure for a future reconstruction process in Yemen: a permanent, independent, public reconstruction authority that empowers and coordinates the work of local reconstruction offices, established at the local level in areas affected by conflict or natural disasters. This proposal does not arise only from lessons learned from previous reconstruction efforts in Yemen, but also from the immediate need for such an institution to begin planning and implementing reconstruction work to the greatest extent possible. 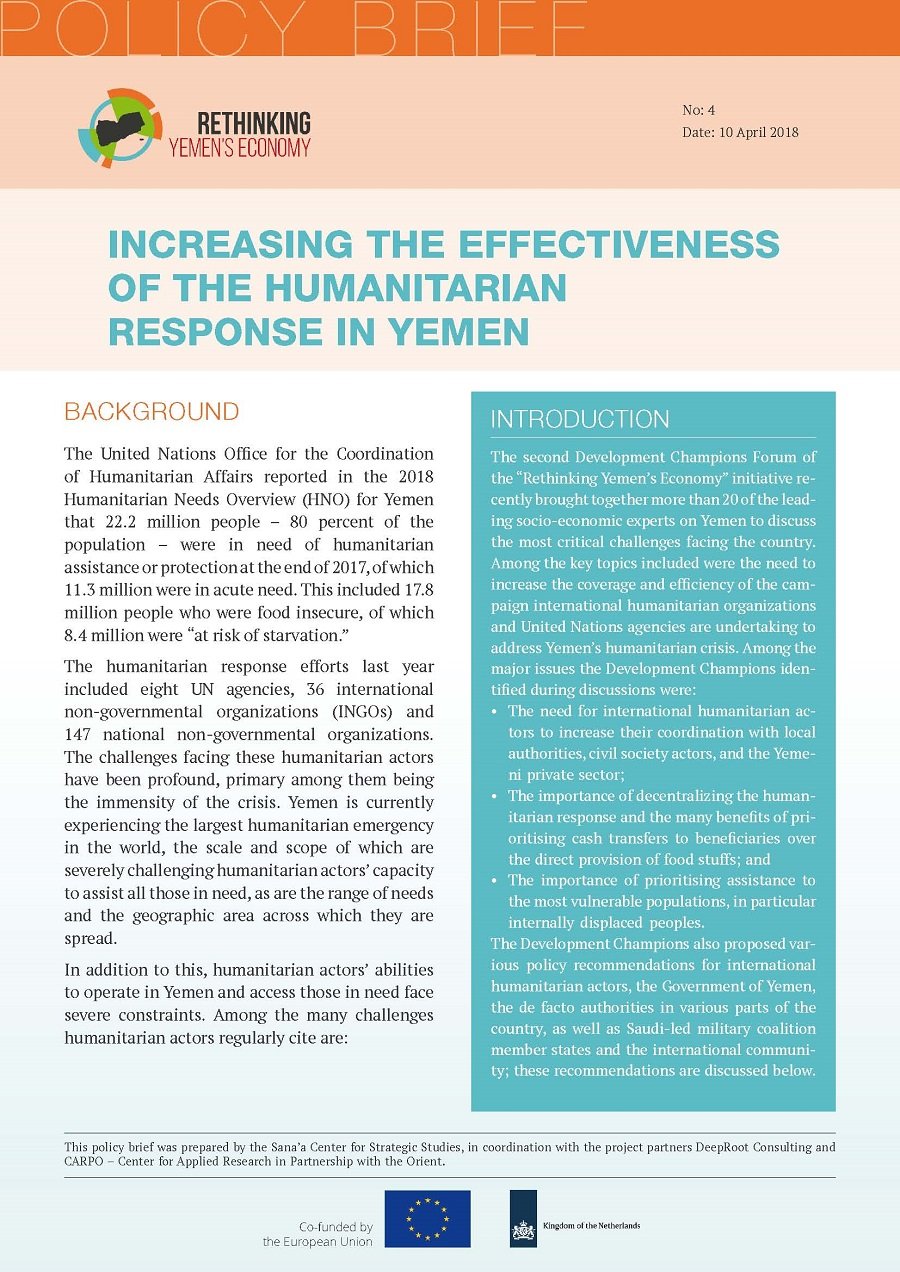 This Policy Brief brings forward recommendations to enhance the effectiveness of the humanitarian response in Yemen. These recommendations result from the second Development Champions Forum, which took place in Amman, Jordan, between 14–16 January 2018 as part of the “Rethinking Yemen’s Economy” initiative. Among the key topics of discussion among the Development Champions were the need for international humanitarian actors to increase their coordination with local authorities, civil society actors, and the Yemeni private sector; the importance of decentralizing the humanitarian response; and the importance of prioritizing assistance to the most vulnerable members of Yemeni society. 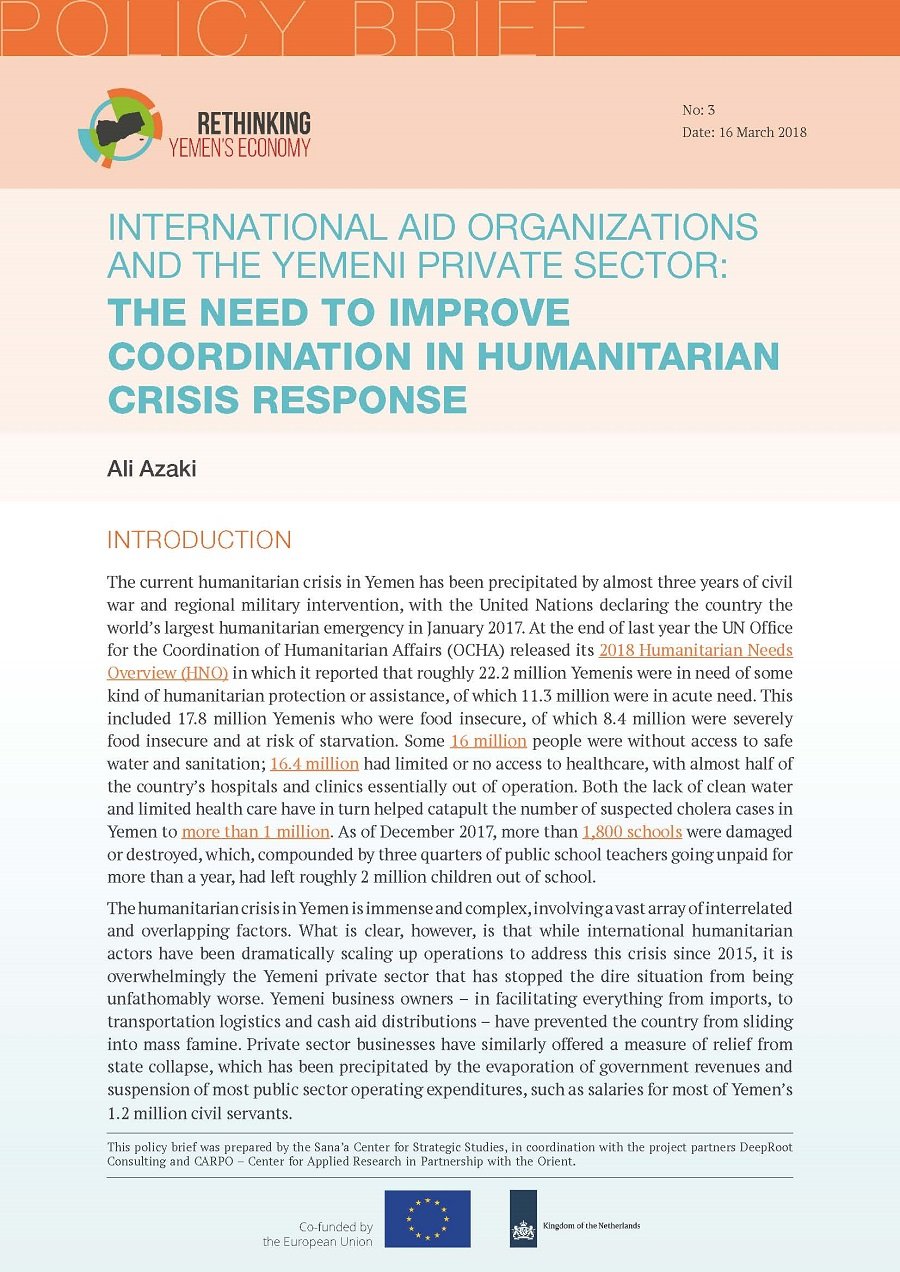 This Policy Brief addresses the role of the Yemeni private sector in mitigating the humanitarian crisis in Yemen as well as its relationship to international humanitarian organizations. It finds that a large number of Yemeni business owners have been engaged in trying to alleviate the suffering of Yemenis out of their own volition, but also in service of and cooperation with international humanitarian agencies. Despite this successful cooperation relationship, this Policy Brief also finds that there remains significant room for improvement particularly what communication and coordination measures are concerned. To this end, it is recommended – amongst others – that international humanitarian actors form a joint coordination platform with the Yemeni private sector, local authorities and civil society. 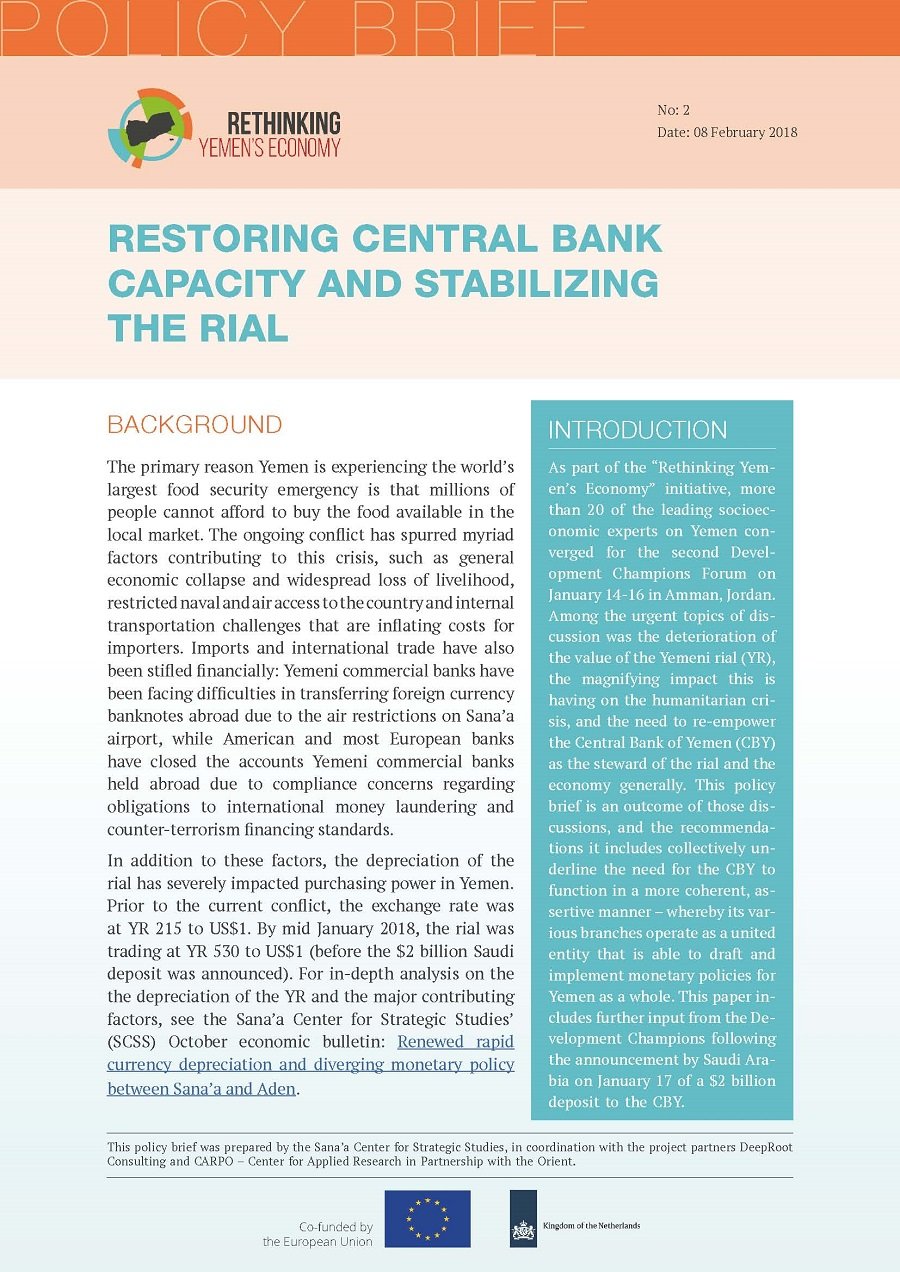 This Policy Brief brings forward crucial recommendations to address Yemen’s current challenges in the financial sector. These recommendations result from the second Development Champions Forum, which took place in Amman, Jordan, between 14–16 January 2018 as part of the “Rethinking Yemen’s Economy” initiative. Here, among the urgent topics of discussion was the deterioration of the value of the Yemeni rial (YR), the magnifying impact this is having on the humanitarian crisis, and the need to re-empower the Central Bank of Yemen (CBY) as the steward of the rial and the economy in general. The recommendations collectively underline the need for the CBY to function in a more coherent, assertive manner – whereby its various branches operate as a united bank that is able to draft and implement economic and monetary policies for Yemen as a whole. 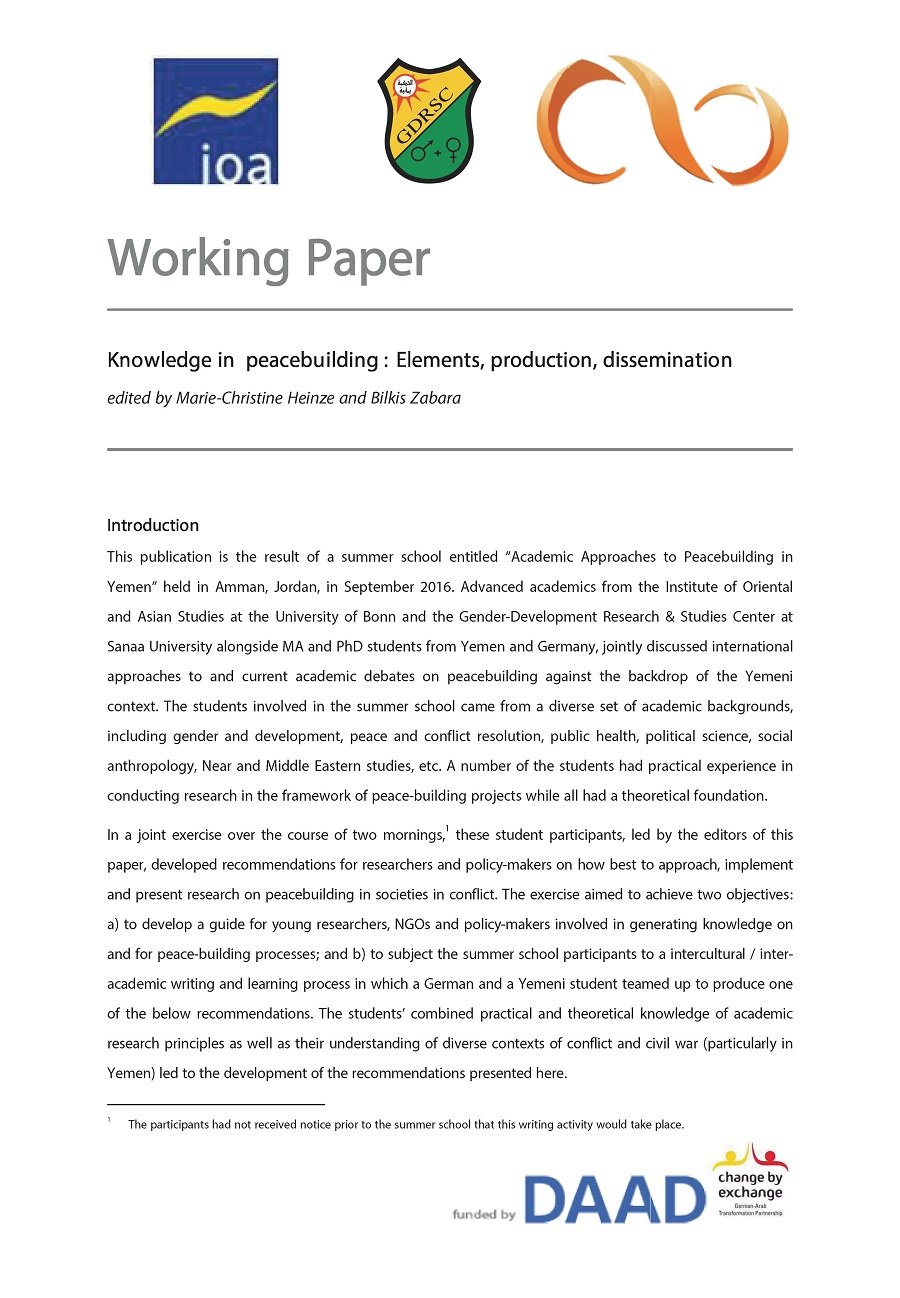 This publication is the result of a summer school entitled “Academic Approaches to Peacebuilding in Yemen” held in Amman, Jordan, in September 2016, which brought together advanced academics from the University of Bonn and the Gender-Development Research & Studies Center at Sanaa University as well as MA and PhD students from Yemen and Germany. In an exercise over the course of two mornings, the student participants, led by the editors of this paper, developed recommendations for researchers and policy-makers on how best to approach, implement and present research on peacebuilding in societies in conflict. The exercise aimed to achieve two objectives: a) to develop a guide for young researchers, NGOs and policy-makers involved in generating knowledge on and for peace-building processes; and b) to subject the summer school participants to a intercultural / inter-academic writing and learning process in which a German and a Yemeni student teamed up to produce one recommendation. This paper is the result of this exercise. 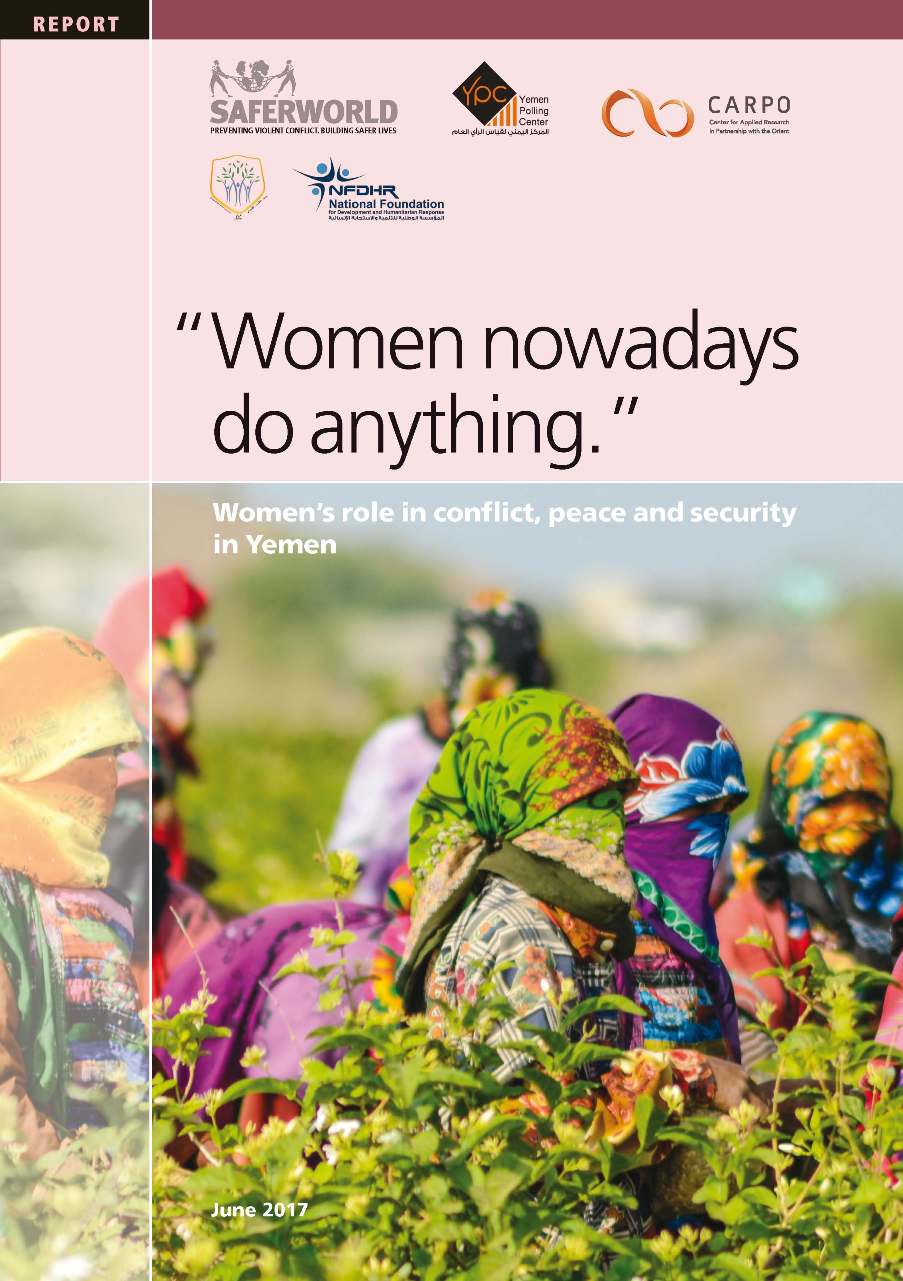 by Marie-Christine Heinze and Marwa Baabbad

This Study brings together the findings of qualitative research conducted in Ibb and Aden by the Yemen Polling Center (YPC) in cooperation with CARPO and Saferworld. It looks at the impact of the war on women and their families in these two regions, particularly in terms of security-related issues, and the roles women play or have played in the conflict as well as in the building of security and peace. 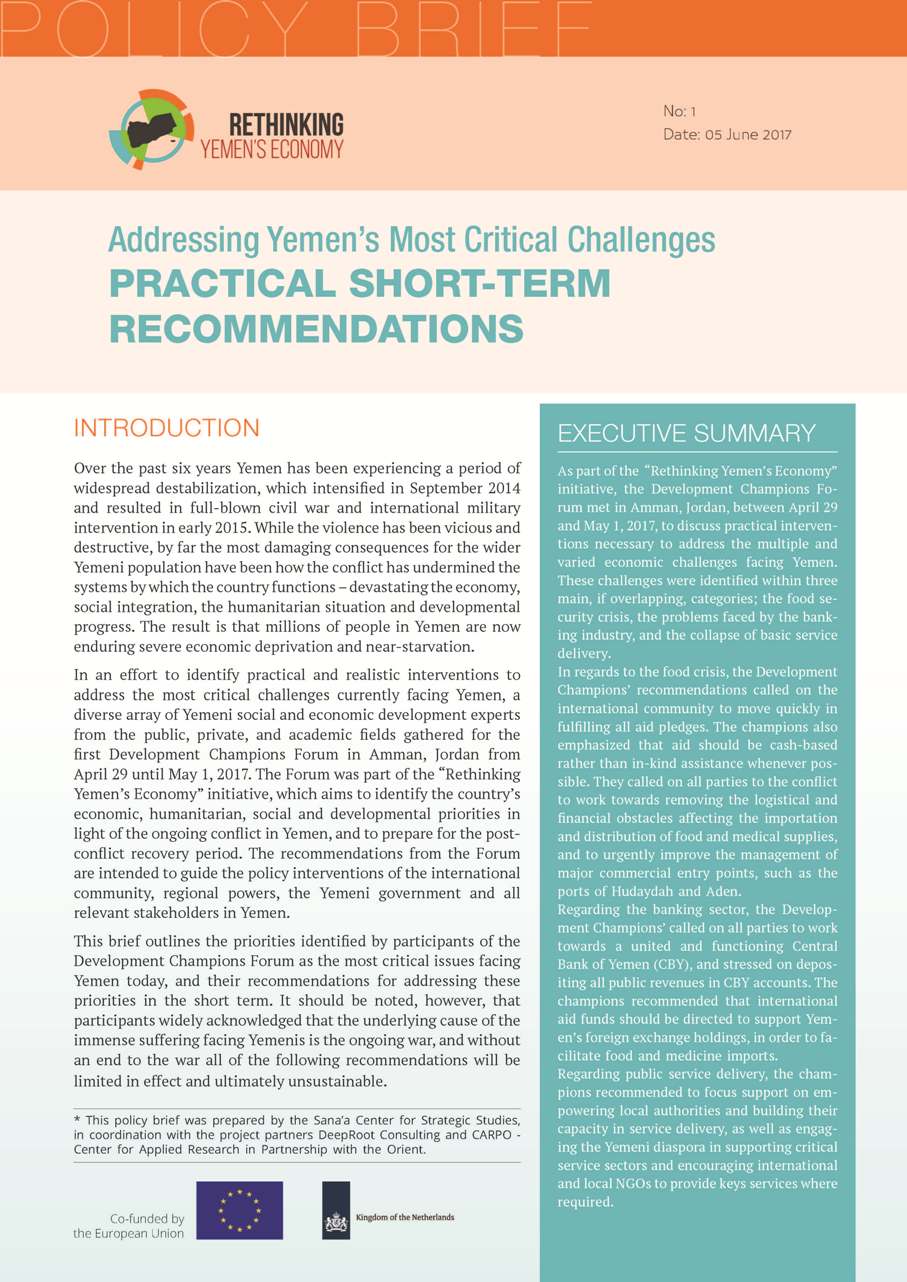 This Policy Brief summarizes the short-term recommendations to address Yemen’s current most critical challenges in development and economy which resulted from the first Development Champions Forum. This Forum took place in Amman, Jordan, between April 29 and May 1, 2017 as part of the “Rethinking Yemen’s Economy” initiative. The challenges addressed in this Policy Brief were identified within three main, if overlapping, categories: the food security crisis, the problems faced by the banking industry, and the collapse of basic service delivery. 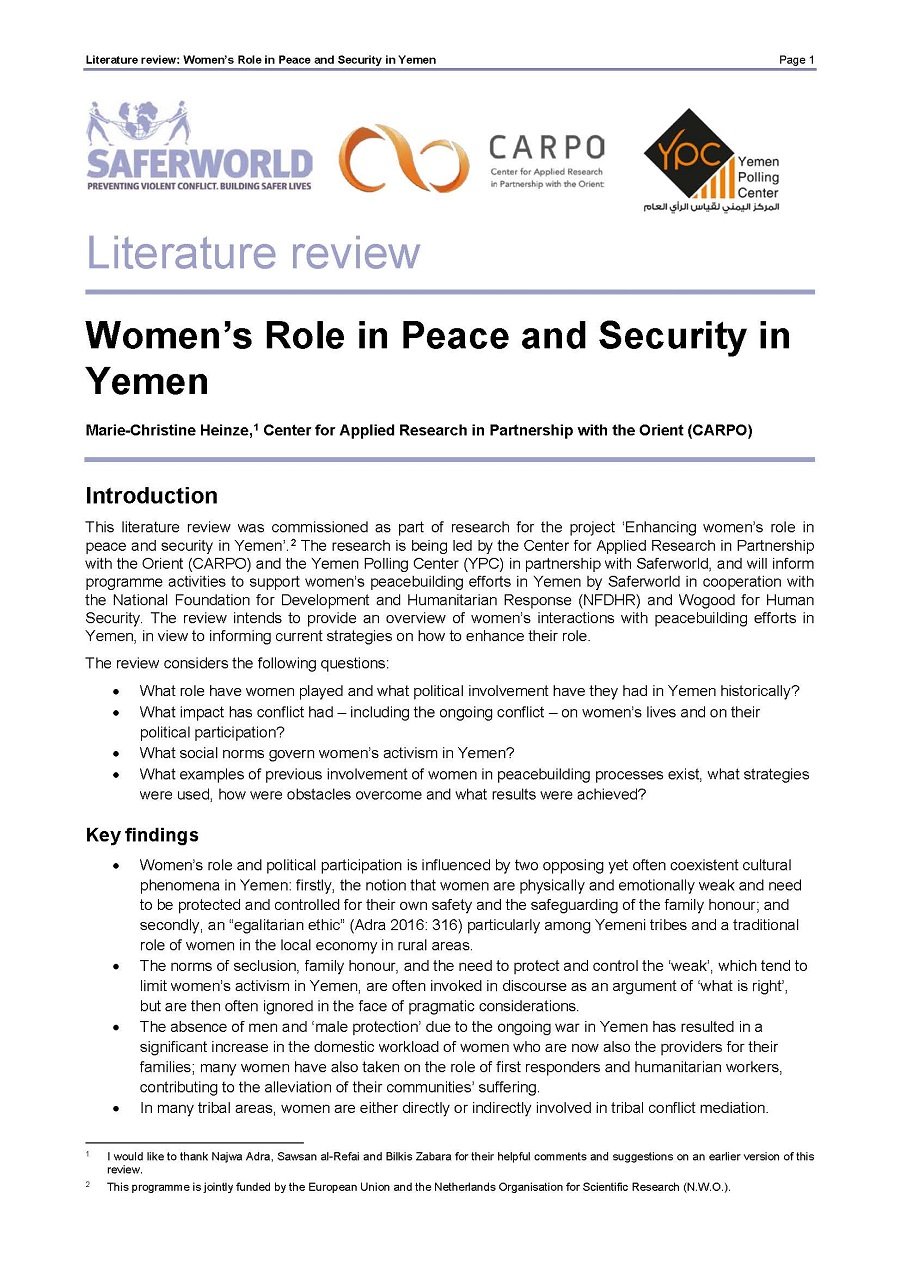 This literature review provides an overview of women’s interactions with peacebuilding efforts in Yemen, in view to informing current strategies on how to enhance their role. In doing so, it considers questions in regard to women’s political participation in the past; the impact of conflict on women’s lives; the social norms governing women’s activism; and examples of women’s involvement in peacebuilding processes.

(1/2) We in CARPO and our partners in the @EWInstitute had the honor of hosting Vice-Admiral (ret.) Ahmad Al-Mulla and Dr @courtneyfreer for the 9th Brussels MENA Briefing on "#Kuwait and the post-Sheikh #Sabah Era" alongside distinguished experts and policymakers.