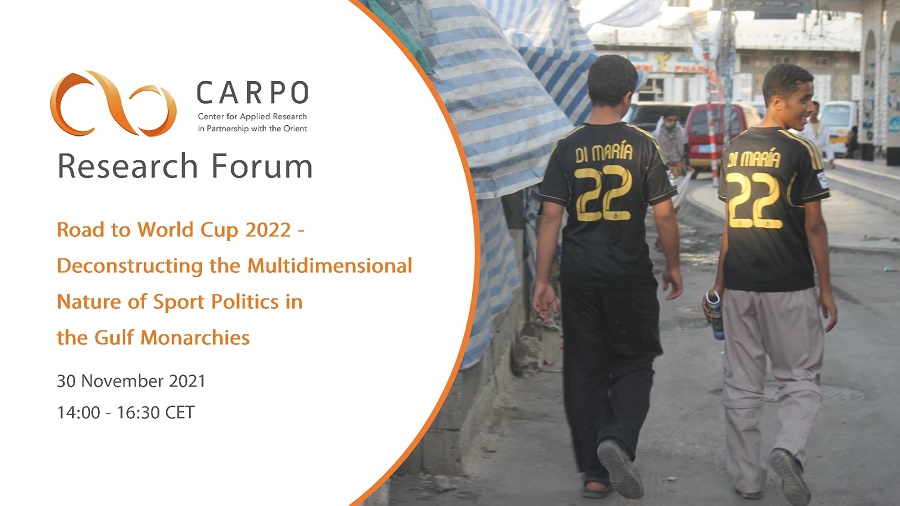 The Gulf region provides a whole bunch of examples of how leaderships strategically engage in global sports. For instance, the United Arab Emirates (UAE), Bahrain and Saudi Arabia organize sports mega events such as the Formula One races and boxing fights. Additionally, Gulf state organizations are heavily involved in sport business through large-scale investments in the French football club Paris St. Germain by Qatar or British football clubs such as Manchester City and Newcastle United by the UAE and Saudi Arabia respectively. The FIFA World Cup 2022 in Qatar is the most recent climax in a series of events and initiatives related to sport politics in which the Gulf Arab region has emerged as an international center of gravity.

Against this backdrop, CARPO’s second virtual Research Forum (CRF) looks at the multi-layered impact of sport politics in the Gulf region. Using a multidimensional perspective, we consider not only outward-oriented issues such as sportswashing or -branding but also its inward-oriented implications on state-society relations in times of socio-economic transformation.

Together with scholars from the Gulf region and Europe we will highlight some of these aspects: The political trend to use sport and sport events as a soft power measure and foreign policy instrument of development cooperation, for instance. On the societal level, guiding themes and questions include sport’s impact on national identity, culture, women empowerment, lifestyle, and activism among others.

Overall, the CRF wants to shed more light on the multidimensional role sport plays in the Gulf region by highlighting obstacles and grievances but also chances and opportunities of future social and political developments.

14:10-14:45 Online Keynote: One Year Ahead of the World Cup in Qatar – Deconstructing Sport Politics in the Gulf states

15:00-16:20 Online Session: Sports, Politics & Social Transformation the Gulf Arab States
The session intends to uncover the multiple and complex dynamics of global sports politics and the involvement of the Gulf states. It aims to discuss the nature of respective policies and debates about ‘sportswashing’, the role of development cooperation and other underlying motives. In addition to this outward-oriented perspective, the session further deals with the interconnections between fundamental social transformations inside the Gulf societies and the rising relevance of sports on a societal level. In all Gulf states, socio-economic transformation remains a key challenge in times of energy diversification, the economic repercussions of COVID-19, and the need to create jobs for the young parts of the population. Against this backdrop, sport forms a relevant element to promote entrepreneurship and job creation. Furthermore, sport creates a driver for social cohesion and identity constructions in times of rising geopolitical shifts. The session thus discusses the new relevance of sport as an integral part of the social transformation in the Gulf states.

16:20-16:30 Concluding Remarks
The final session aims to draw conclusions and discuss future trends in sports in the Gulf monarchies.

Danyel Reiche
Danyel Reiche is Visiting Associate Professor at the Georgetown University Qatar. He is on leave from the American University of Beirut (AUB) in Lebanon where he is a tenured Associate Professor of Comparative Politics. His research focuses on sport policy and politics. He published Success and Failure of Countries at the Olympic Games in 2016. He further edited with Tamir Sorek a volume entitled Sport, Politics and Society in the Middle East, which was published in 2019. Danyel is co-founder of the Sports Scholars in Lebanon Network (LESSN) and chair​ of the Political Studies Association’s Sport and Politics Study Group.
Kristian Coates Ulrichsen
Kristian Coates Ulrichsen is a Baker Institute fellow for the Middle East. Previously, he worked as senior Gulf analyst at the Gulf Center for Strategic Studies and as co-director of the Kuwait Program on Development, Governance and Globalization in the Gulf States at the London School of Economics (LSE). He has written extensively on political economy, security, and international relations of the Arab Gulf States. His most recent books include Qatar and the Gulf Crisis or The United Arab Emirates: Power, Politics, and Policymaking.
Kamilla Swart
Kamilla Swart is Associate Professor in the Masters of Science in Sport and Entertainment at the Hamad Bin Khalifa University. Kamilla also serves as a Senior Research Associate, School of Tourism and Hospitality at the University of Johannesburg. Kamilla’s research interests include sport and event tourism, with a specific focus on mega-events and sport tourism policies, strategies, impacts, sustainability and legacy. She was instrumental in developing the 2010 FIFA World Cup Research Agenda and served as the City of Cape Town’s Research Coordinator for 2010. She is currently driving the 2022 FIFA World Cup Research Agenda, working closely with the Qatar Foundation 2022 FIFA World Cup Master Program and the Supreme Committee for Delivery and Legacy.
Ahmed Al Omran
Ahmed Al Omran is a Saudi journalist and former correspondent for the Financial Times. Born and raised in Hofuf, eastern Saudi Arabia, Al Omran is a graduate of Columbia Journalism School. From 2013 to 2017, he covered Saudi Arabia for The Wall Street Journal. Earlier, he worked for National Public Radio in Washington D.C. His work also has appeared in the New York Times, the Guardian and Foreign Policy. He is currently a Knight-Bagehot Fellow at Columbia University, and he has published a monthly newsletter about Saudi Arabia called Riyadh Bureau.
Kristin Diwan
Kristin Diwan is a senior resident scholar at the Arab Gulf States Institute in Washington. Her current projects concern generational change, nationalism, and the evolution of Islamism in the Gulf states.  Her articles have appeared in both academic and policy journals such as International Affairs and Foreign Affairs, and her commentary in prominent media such as the New York Times, Financial Times and Washington Post.  She holds a Ph.D. from Harvard University.