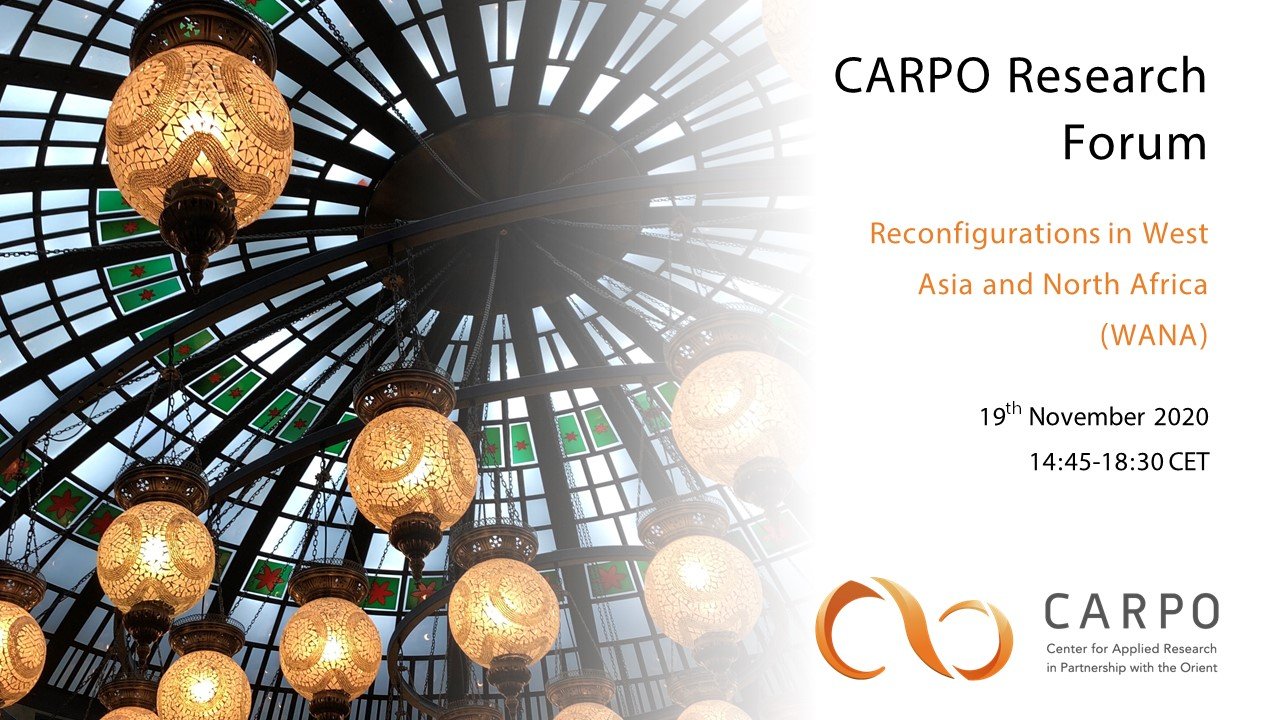 The region that spans West Asia and North Africa (WANA) is in a process of a profound transformation. Despite their heterogenous character, all WANA countries experience social, (geo)political, environmental and economic challenges they need to overcome; albeit in different degrees. The current COVID-19 pandemic acts as an accelerator to this development while at the same time exposing the high vulnerability of the region.

CARPO’s first virtual research forum aims to address these reconfigurations in the region. With our speakers and audience, we not only plan to discuss some of the most pressing threats, including geopolitical shifts, questions of a sustainable development and more widespread social contestation, but we will also elaborate on the interplay of the different contexts (national, regional and global) in which these developments take place.

Breakout Session 1: A reconfiguration of power and China’s emerging role in the Middle East: game-changer or much ado about nothing? ↓
China has become an increasingly significant player in the Middle East in the past decade. While it is still a relative newcomer to the region and is extremely cautious in its approach to local political and security challenges, the country has been forced to increase its engagement with the Middle East due to its growing economic presence there. As the long-standing dominance of the US over the region shows signs of decline, China’s role becomes of increasing importance. Yet, little is known about China’s position and objectives in the Middle East, or of the ways in which these factors could affect regional stability and political dynamics in the medium to long term.
This panel intends to address the geopolitical reconfigurations and constellations of external actors, that influence the region’s development. Particular focus is on the rise of China and its growing role in the WANA region. It invites all people interested in a geopolitical perspective on regional developments.

Camille Lons, The International Institute for Strategic Studies (IISS) Bahrain:
Assessing China’s Geoeconomic and Strategic Weight in the MENA region, Beyond the Sound and the Fury

Jacopo Scita, School of Government and International Affairs, University of Durham:
A Not-so Manifest Destiny: Will China Become a Security Guarantor in the Persian Gulf?

Breakout Session 2: The climate hedge and the arduous path towards sustainable development ↓
The growing importance of balancing economic and social growth while protecting the environment as a public good enjoys wider acceptance. Whilst far from becoming a top priority, sustainability has become a buzzword for policy makers in the region. At the same time, popular ‘environmental consciousness’ is growing and exposes the lack of environmental management by the governments in place. Many countries suffer from soil degradation, biodiversity loss, exposure to toxins, waste disposal, threats to food and water security, pollution, and biodiversity loss, to name only a few of the environmental challenges faced by the WANA region today. The severe effects of climate change, such as global warming, exacerbate the deteriorating ecological situation. As a transboundary threat, the climate hedge is often considered to be a regional challenge and a matter of collective security interest but means of regional cooperation and collaboration barely exist.
Instead of discussing the manifold challenges of environmental degradation and elaborating on the obstacles and shortcomings of a sustainable development, this panel rather takes a political ecology perspective to uncover the underlying political power relations and its linkages to environmental sustainability. It thus focusses on discourses and practices around environmental policy making and governance as well as its contestation.

Moderator:
Tobias Zumbrägel, Researcher, CARPO
Breakout Session 3: Reconfiguration or Collapse of Societies? The Protest Waves since the so-called Arab Spring ↓
The role of civil society in the WANA region has undergone drastic changes since the so-called Arab Spring movements in 2011 laid bare the degradation of many countries’ social contract. In more recent years, the call for change in state-society relations has been strongly voiced in many countries, including Iraq and Lebanon. The demands of the civilian population are multiple and highly dependent on the specific context. They include anti-corruption, redistribution of goods and wealth, provision of health care, electricity and other basic goods in addition to a rethinking of the political and economic system. The protest movements mostly break open the sectarian, tribal, age and gender barriers. At the same time, next to the civil societies, numerous local actors have gained power, trying to fill the void left by the state’s instability to provide basic services. These actors foster new regional dynamics and revive tensions.
This panel intends to look at the national and intra-state level and address the differences and similarities visible in the WANA countries’ movements. With a focus on Iraq and Lebanon’s latest movements, where no new social contract is in sight, questions about where the protest is heading stay open.